2) Birds of a feather: a novel

5) Journey to Munich: a novel

6) In this grave hour: a novel

Author
Winspear, Jacqueline
Formats
Book, Book on CD, eAudiobook, eBook, Kindle
Book
Show Edition
On Shelf
East Flagstaff Public Library - Fiction  1 available
M WINSPEAR, JACQUELINE
Main Flagstaff Public Library - Mystery  1 available
M WINSPEAR, JACQUELINE
Place Hold
Book on CD
Show Edition
On Shelf
Main Flagstaff Public Library - Audiobooks CD or MP3  1 available
C D M WINSPEAR, JACQUELINE
Place Hold
eAudiobook
Show Edition
Available Online
Check Out OverDrivePreview Part 1Preview From the book
eBook
Show Edition
Available Online
Check Out OverDrivePreview From the book
Kindle
Show Edition
Available Online
Check Out OverDrivePreview From the book
Description
Read Description
When listeners last heard Maisie Dobbs, it was 1938, and the world was on the brink of war. Maisie herself was on a dangerous mission inside Nazi Germany, where she encountered an old enemy and the Fuhrer himself. In In This Grave Hour, a year has passed, and Maisie is back home in England - yet neither she nor her nation is safe. Britain has just declared war on Germany and is mobilizing for the devastating battle ahead. But when she stumbles on...
More Info
SHARE

8) Among the mad: a Maisie Dobbs novel

9) A dangerous place: a novel

10) A lesson in secrets: a Maisie Dobbs novel 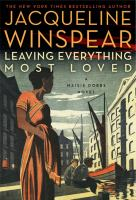 12) Leaving everything most loved: a novel

13) The mapping of love and death: a Maisie Dobbs novel

14) The consequences of fear: a Maisie Dobbs novel 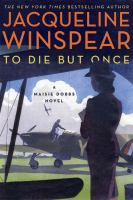 15) To die but once: a Maisie Dobbs novel

Author
Winspear, Jacqueline
Formats
eAudiobook, New-Book
eAudiobook
Show Edition
Checked Out
Place Hold OverDrivePreview From the book
New-Book
Show Edition
On Shelf
East Flagstaff Public Library - New Books  1 available
M WINSPEAR, JACQUELINE
Quick Copy View
See Full Copy Details
Place Hold
Description
Read Description
October 1942. Jo Hardy, a 22-year-old ferry pilot, is delivering a Supermarine Spitfire--the fastest fighter aircraft in the world--to Biggin Hill Aerodrome, when she realizes someone is shooting at her aircraft from the ground. Returning to the location on foot, she finds an American serviceman in a barn, bound and gagged. She rescues the man, who is handed over to the American military police; it quickly emerges that he is considered a suspect in...
More Info
SHARE

Didn't find what you need? Items not owned by Flagstaff City Coconino County Public Library can be requested from other Interlibrary Loan libraries to be delivered to your local library for pickup.

Can't find what you are looking for? Try our Materials Request Service. Submit Request